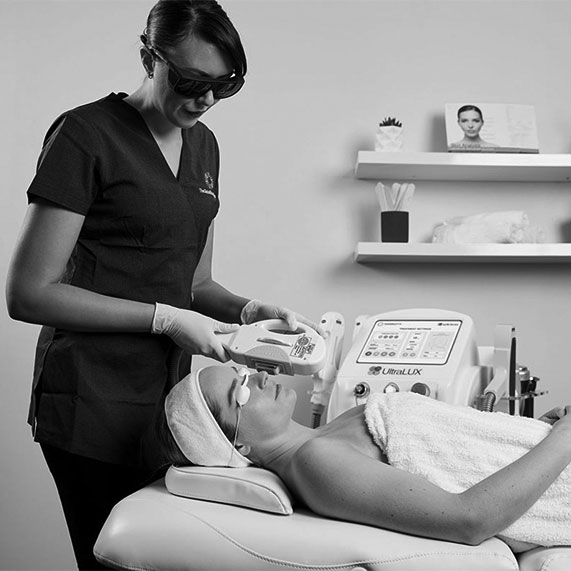 IPL is similar to other laser treatments as they both use light to heat and destroy their targets; such as sun damage spots on skin, and hair follicles for hair removal. But unlike lasers that use a single colour wavelength of light that only treats one condition, IPL uses a broad spectrum that can be used with interchangeable filters, allowing it to be used for a range of treatments.

Not everyone is suitable for IPL treatments. Those who tend to form keloid scars and those with dark complexions may not be good candidates for IPL procedures, though for the vast majority of skin types, this is somewhat of a reliable and flexible workhorse in the aesthetic industry.

The treatment starts with the practitioner placing dark clinical glasses over your eyes for protection and rubbing a cool gel onto your skin. Once this is applied, the device is pressed to your gel-protected skin. The pulses are felt on the skin as a sting, similar to being snapped with a rubber band. While it can be uncomfortable, it is generally felt to be tolerable.
Depending on which part of your face or body is being treated and how large the area is, the treatment time is generally between 20 to 30 minutes.

Q. Does IPL work?
A. Yes. While there are some immediate, visual results, especially rejuvenating your complexion and correcting skin discolouration, such as age spots, the obvious benefits will become more apparent over a series of treatments. This is especially true for hair removal.

Q. Should I do anything in advance to having an IPL treatment?
A. Yes, you need to avoid sun exposure to the proposed treated areas, as well as harsh chemical skin treatments and blood thinning medication such as aspirin and ibuprofen.

Q. Do I need to do anything after an IPL treatment?
A. Yes, treat your skin gently in the first few days after treatment as your skin may still have absorbed some of the ‘heat’. Really hot showers or baths may not be comfortable, as well avoid shaving and harsh chemicals on the treated areas.

Q. Does having an IPL procedure feel uncomfortable?
A. Yes, but almost everyone finds it ‘bearable’. Most people describe it as having a rubber band flicked on your skin. Treatments are generally 20 minutes or less, though longer treatments may be increasingly uncomfortable. It also depends on where you are having treated. For instance, the upper lip would be more sensitive that say the outer thigh region.

Q. Are there any risks associated with an IPL procedure?
A. As with most cos-medic treatments, it is imperative you are treated by a qualified and experienced practitioner. In good hands, this is a safe and effective treatment. Unfortunately, in the hands of unqualified practitioners, you could be putting your skin at risk.

The cost of IPL varies widely. As most treatments require a number of sessions for the desired result, most clinics sell IPL sessions as packages. The cost also depends on the treated areas. Obviously, small facial areas are quicker (and therefore less expensive), than larger bodies areas such as the legs. It is safe to say that the cost is in the low to mid hundreds and as the technology has become more advanced and available, the costs keep becoming less.